It’s been a while since the last blog post, and I’ve had a couple of people get in touch asking where the car is up to. There hasn’t been much to write about, since the car passed the registration inspection shortly after the previous post, and it hasn’t needed much work since then.

That said, there were a couple of smaller jobs that are worth covering.

The car developed an issue where it wouldn’t run for more than a minute before stalling out, unable to be restarted unless it sat for a while (over ten minutes). I initially assumed the carburettor was the problem, since the previous rebuild didn’t get it 100% of the way there and it was still a little rich (and idling fast).

So I replaced the original Solex carburettor with an aftermarket (Britpart) Zenith copy. This didn’t work at all, and it turned out the new Zenith copy was bad out of the factory! I got a replacement sent out for free (this happens a lot, according to the reseller) and it helped the rich running condition (and made it easier to start) but the vehicle would still die after a few minutes.

As you’ve probably guessed from the heading, the problem was the ignition coil overheating. I only noticed this after checking for spark after the vehicle had stalled - this turned out to be the key, since it was generating a healthy spark while it was cool.

It’s unfortunate (and difficult to diagnose) when two things fail at the same time, but it’s running great now.

I wasn’t particularly happy with the steering box itself either, as it had developed a small leak. So I decided to give it another rebuild, and properly tighten the fasteners from the steering box to the mounting bracket.

The manual claims it’s possible to remove the box without removing the front guard, but I don’t think that’s possible - maybe on later models. I couldn’t get the box forward enough to rotate the stiffener bracket out of the way of the clutch master cylinder without hitting the wing. I also removed the door to make life a little easier when dealing with the fasteners in the toe box, here’s what it looked like: 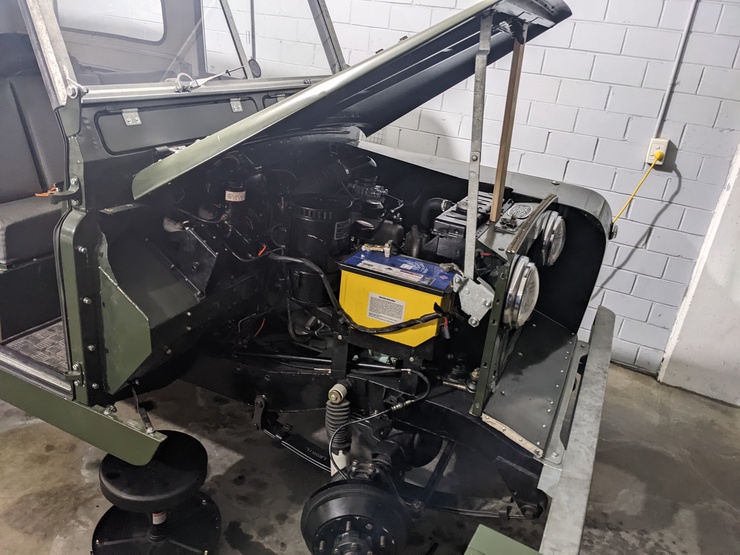 After rebuilding all of that and going for a test drive, I was a little disappointed that it only removed about half of the free play - an improvement, but not as much as I’d hoped. I’ll need to get a second person to sit in the car at some point and twiddle the steering wheel back and forth while I inspect things, as I suspect the issue is downstream of the steering relay (none of which I can see while turning the steering wheel). It might also be worth checking the toe-in, since I did that with a measuring tape and it may not have been the most accurate job. Again, that’s much easier with two people.

Another note on the workshop manual - ignore the torque specifications in the steering section. It recommends 41Nm for the fasteners from the stiffener bracket to the box, which is way too much for 5/16” threads in aluminium. It also recommends 41Nm for the ball joint securing nuts, which is (in my opinion) not quite enough. Finally, the figure of 75Nm for the 1/4” fasteners clamping the ends of the longitudinal steering arm to the ball joints is ludicrously high, and will probably strip whatever fastener you’re using.

An update on the small bits from last time

The accelerator pedal also got a stronger spring as part of the carburettor upgrades.

Unless something goes wrong, I don’t plan on updating this blog particularly often. There might be some more steering work (as mentioned), and I’ve got a new transfer case sump from Wootz that I plan to fit as a cooling/leak prevention upgrade. It definitely gets warm when driving on the highway for any length of time, and there’s a slow leak that starts when this happens. It makes sense (at least to me) since the rate of expansion with heat will be different for the aluminium box and the steel sump.