Spent a few days working with Mark Natoli to get the final three panels for the Land Rover sorted out (lower tailgate, upper tailgate, and the roof panel). As these are the last panels, it’ll likely be the last time I work with Mark on this project, which is a shame since it’s loads of fun and there’s always heaps to learn. We’ll see what happens once I’m done with this Land Rover though…

This was probably the trickiest panel of the lot, since it was in poor shape but not poor enough to justify replacing the entire thing. My initial plan was to replace the central sheet and re-do all of the spot welds for the other bits spot-welded to it. After seeing the origami-like way it was all folded together, Mark talked me out of this. I’m glad about that, since repairing the central piece didn’t end up being as involved as I thought. In the end, the only metal we replaced was the lower edge: 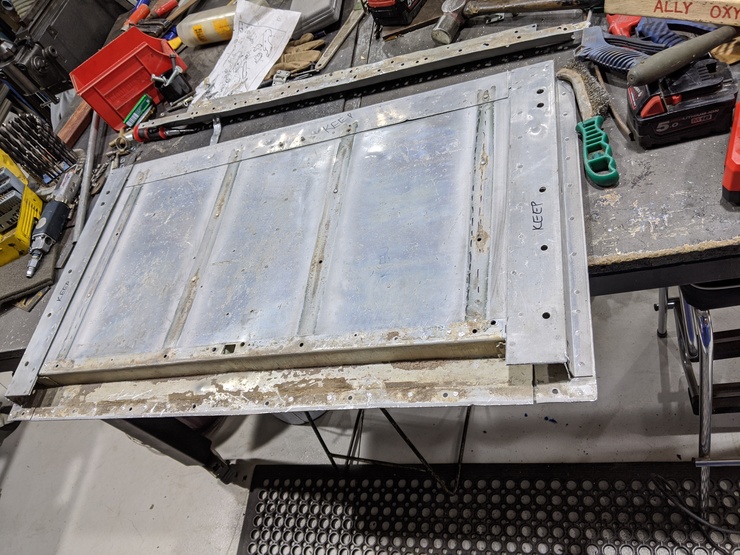 While the panel was apart, and with the lower edge missing, we took the chance to clean up the previously-hidden spots. This was also necessary for making the spot welds work, and also uncovered some interesting bits of crud. This particular spot had formed into what looked exactly like sandstone. This is what was left after attacking it with a wire wheel and a flap disc on an angle grinder - it eventually needed to be removed with a chisel. It’s funny to think that the car is old enough that there was some geology happening in the rear tailgate. 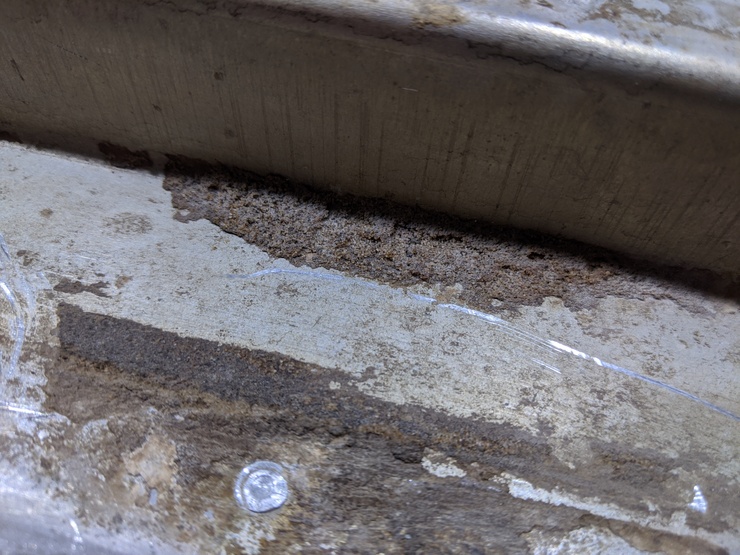 In the previous shot, you can also make out some stripes along the vertical edge. These are marks made when the sheet metal was originally pressed, which is an interesting reminder of where these panels came from and how they were made.

Making the replacement section was easy enough, but we needed to experiment with the spot welding machine to get it set up correctly. The machine wasn’t designed for aluminium, and the test pieces weren’t indicative of how the real panel absorbed heat and responded to the current. The final process ended up with us spending 60% of the time getting the machine just right, and 40% of the time doing the sixty or so spot welds across all three of the panels. 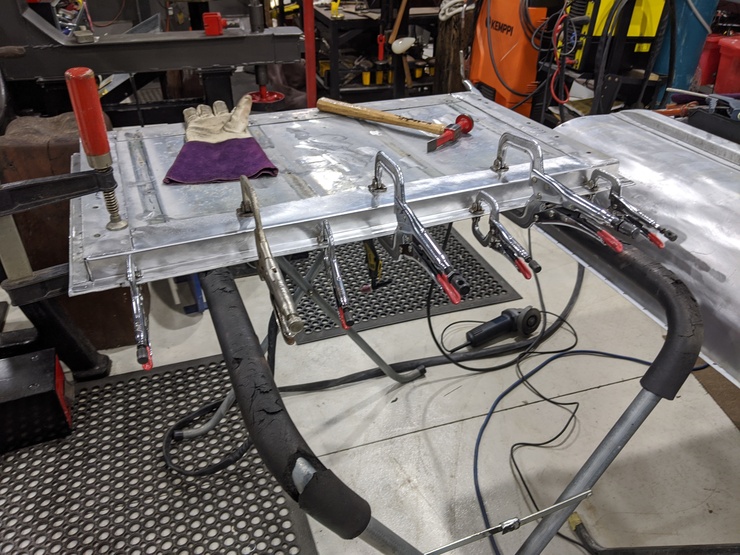 The original panel was too far gone to save, as the steel frame had caused electrolytic corrosion (“swiss cheese”) all the way around the edge.

Despite being a brand new panel, this was probably the simplest job we had. The upper tailgate is a simple shape, and we got it done over the course of about four hours (spread out between jobs on the other two panels). I’m very happy with how it’s come up, and it fits the steel frame perfectly. 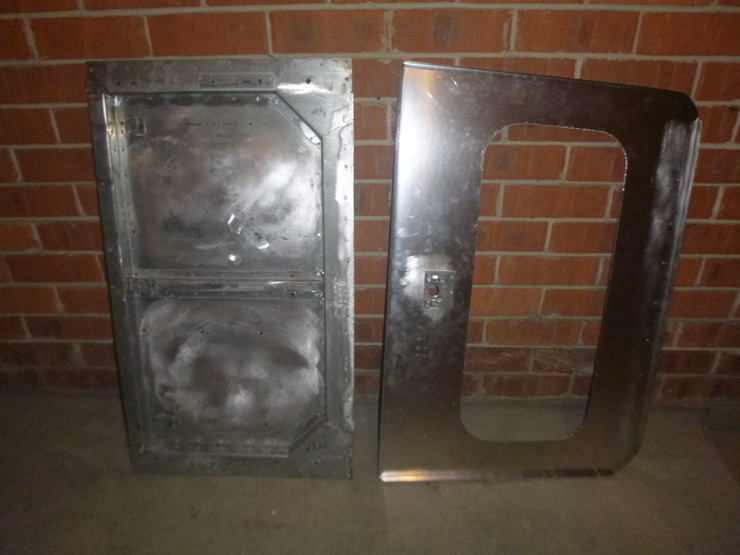 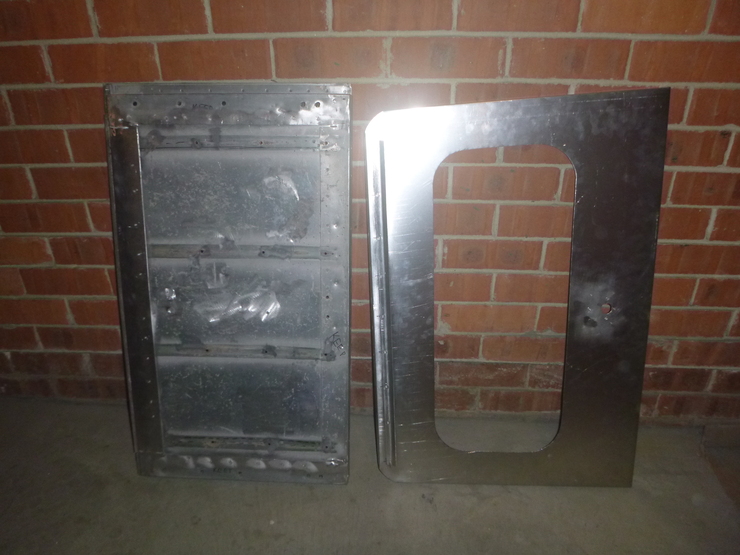 I don’t have many pictures of this, partly because I forgot to take photos and partly since it didn’t fit in my car (which meant I couldn’t get it home this weekend). There were a few challenging aspects to this, partly due it’s size (1.4m x 2m) and partly because of the nature of the damage. It had been driven under a low tree at some point, which resulted in two long gouges that also bent the horizontal braces. These stretched the aluminium all the way along the panel, resulting in a lot of time spent working out the depressed area, then heating and shrinking the metal for about 300mm on either side of the gouges.

As if that wasn’t enough, there was also a fair bit of hail damage, a large dent in the front edge that looked like it was driven into the corner of a building, and a bunch of vertical indentations along the sides, aligned with the rivet holes. Some of the spot welds along the front had let go as a result of the combined damage over the years. 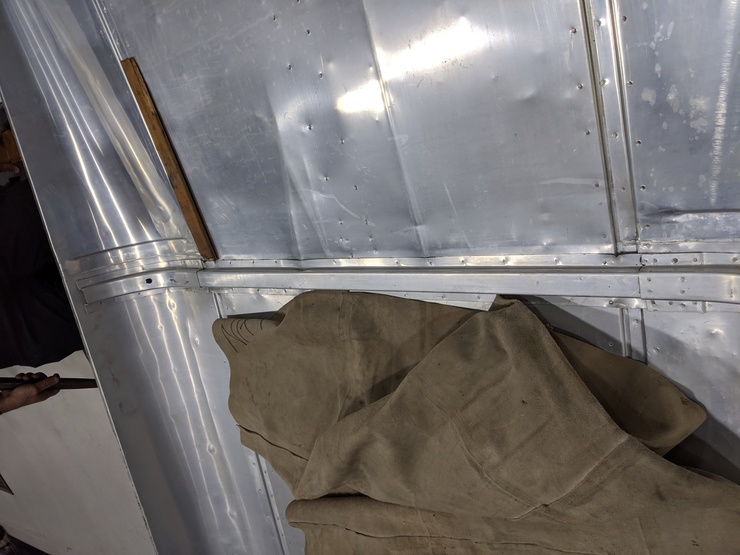 I don’t (yet) have a photo of the finished panel, but Mark managed to get it fixed up beautifully, and it’s a real credit to his work. If you need any sort of metal shaping or custom panel work, give him a call or email.