I solved this by using the engine crane to hoist each side of the chassis up high enough to make enough of an angle to pull the half shafts out, which ended up being a slightly scary 20 degrees for the passenger side shaft. The driver side shaft only needed to come up about ten centimetres.

Anyway, it’s all in, and now I have the joy of repeatedly bashing my shin into the protruding half shafts until I get used to them (they’re now the widest part of the vehicle). I’m also experimenting with keeping dust off things with a plastic sheet. I’m not too worried about the chassis or axle casing, but I don’t want sanding dust getting onto the axle components. 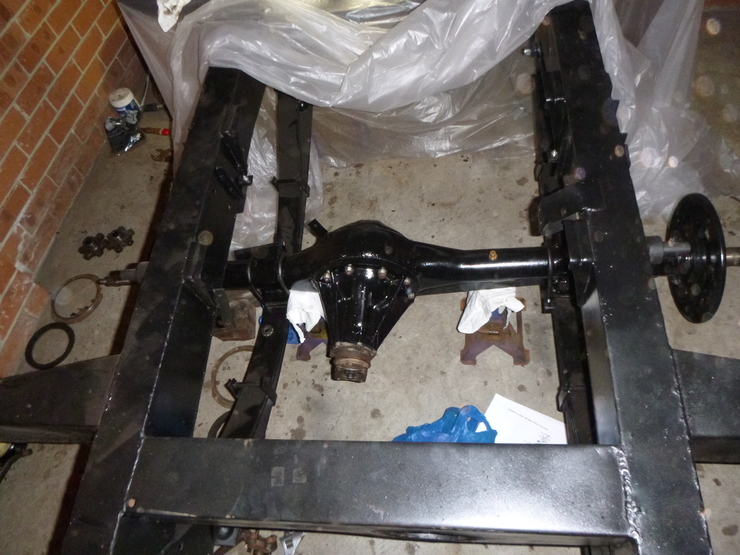 I’ve also sanded/painted a bunch of components for the rear brakes, including the anchor plates, anchors, and hub bearing sleeves. The anchor plates are silver since they’re a differerent, brake fluid resistant paint. I’m still waiting on a bunch of fasteners to arrive, so it’s just loosely held on by whatever old bolts I could find lying around. 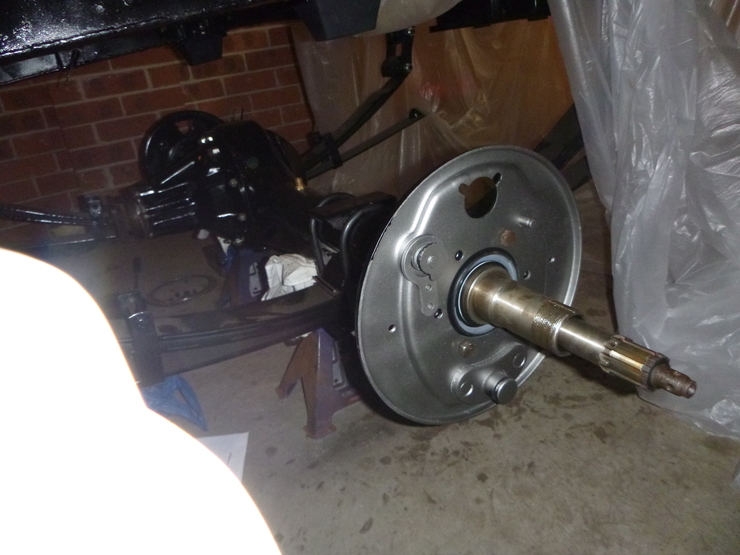 No differential pinions yet; other difficulties

I tried replacing the seals and gaskets on the differential pinions, but I couldn’t find a good way to prevent the axles spinning while undoing the big nut on the pinion, so they’ll have to wait until the hubs are on and I can wedge something between the wheel studs and the ground.

Another upcoming problem is that, while disassembling one of the swivel pins, I found a whole bunch of metal chunks and tiny little spindles. I suspect they’re from the front axle universal joint, which has indeed disintegrated pretty spectacularly (I’ll have photos when I start work on them). Thankfully, I’ve already got some replacements since I’m replacing most bearings.

Another issue (from the same front swivel pin!) is that the steering lock stop bolt in the swivel pin casing has sheared, perfectly flush with the casing. I tried a thread extractor, but that broke and left a nice big hole in the bolt. I’ve ordered a thread tap, and I’ll see how it goes. Happily, I can continue with sanding/painting for the time being.

An update on the hubs situation from last week: the front two hubs and drums are separated, mostly by hitting it with a hammer.

The rear hubs are still stuck fast to the drums, one because there’s a really stubborn screw still holding it in. The other is getting a daily treatment of WD-40 and some hits with a hammer.